From Mainframe Computers of the 1980s to the Smarter, Faster, Decision-Fueling Systems of Today: Explore the History of Data Collection

From Mainframe Computers of the 1980s to the Smarter, Faster, Decision-Fueling Systems of Today: Explore the History of Data Collection 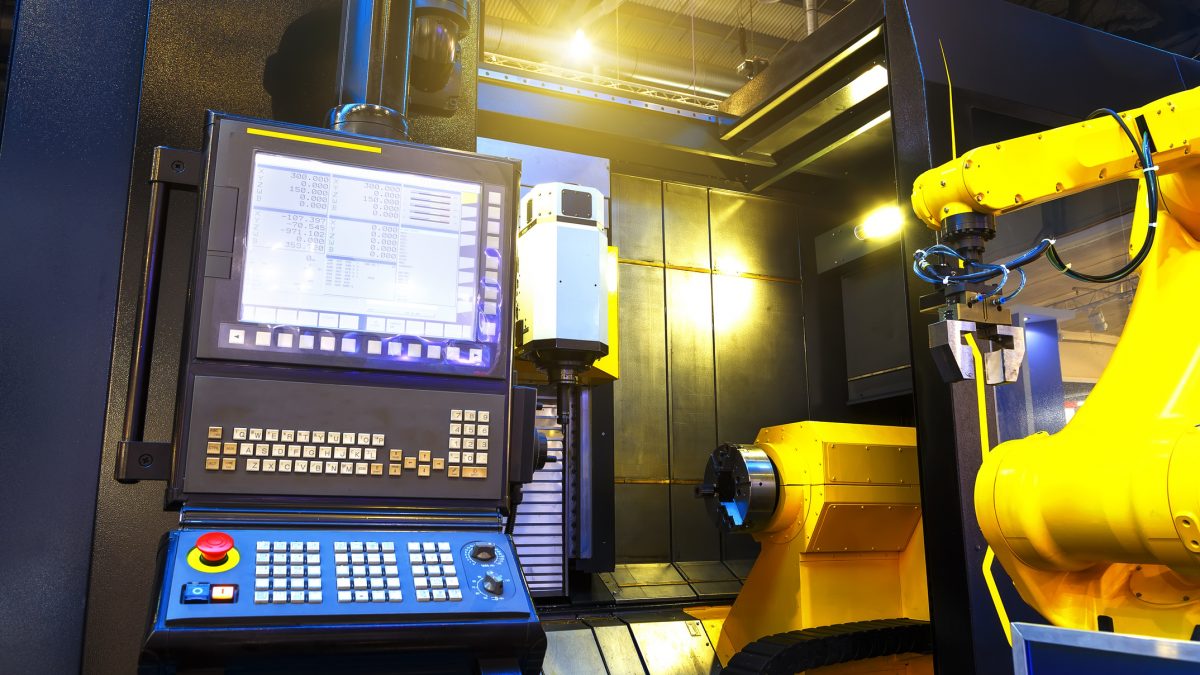 A decade-by-decade look at how manufacturing technology has evolved, from 1980 to 2020 and beyond. Real-time, accurate, enterprise-wide data may be the gold standard now, but that has not always been the case.

Today’s can-making operations move at a remarkable stride and scale compared to just four decades ago. From then to now, one thing has remained steady – the desire for useful data.

Real-time accurate data that entire enterprises can rely on may be the gold standard now, but it has taken years of innovation to get to this point. In the 1980s, many manufacturers were starting to look for innovative systems that would gather critical data by using new automation technology.

Currently, manufacturing data is delivered faster, smarter, and more on-demand than ever before. Line, plant, and enterprise decisions are now fueled by real-time accurate data from multiple vantage points – both inside the plant and on the move – via mobile apps. But how did we get here, to this age of digital technology-rich data-driven manufacturing?

Let us dive in and explore how manufacturing technology has evolved decade by decade. 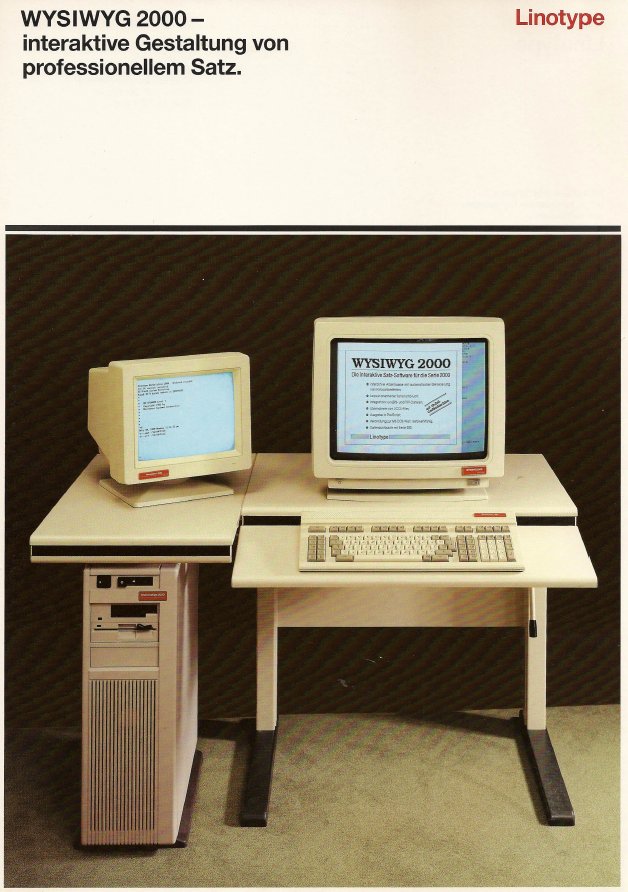 During the 1980s and 1990s, many manufacturing lines still required manual set up and weren’t very flexible. Size and shape changeovers were painful. Bottlenecks and downtime had the potential to stall a whole plant. Equipment and systems weren’t standardized.

Most data was collected at individual machines and not shared between machines or system-wide. Decision-making was fueled by operator word-of-mouth, staff tribal knowledge, and paper processes.

Fundamentally, the data wasn’t reliable because it was likely collected and processed manually: hand-written on paper, passed off to one or more other people to be tabulated, and then distributed for review. Most times, the findings were not actionable due to the data being stale.

The growth during this period was in data collection automation. Data went from being collected by hand and marked on paper to being collected by machine and displayed on computer screens. Over time, can-making operations teams wanted more, and demand grew for all-encompassing accurate data collection, better shop floor visuals, and enhanced reporting and statistics.

As the 1990s faded, Microsoft Windows arrived on the scene, the term Manufacturing Execution System (MES) was coined, and competitive can makers began moving from expensive mainframes to PCs and custom client-server configurations. 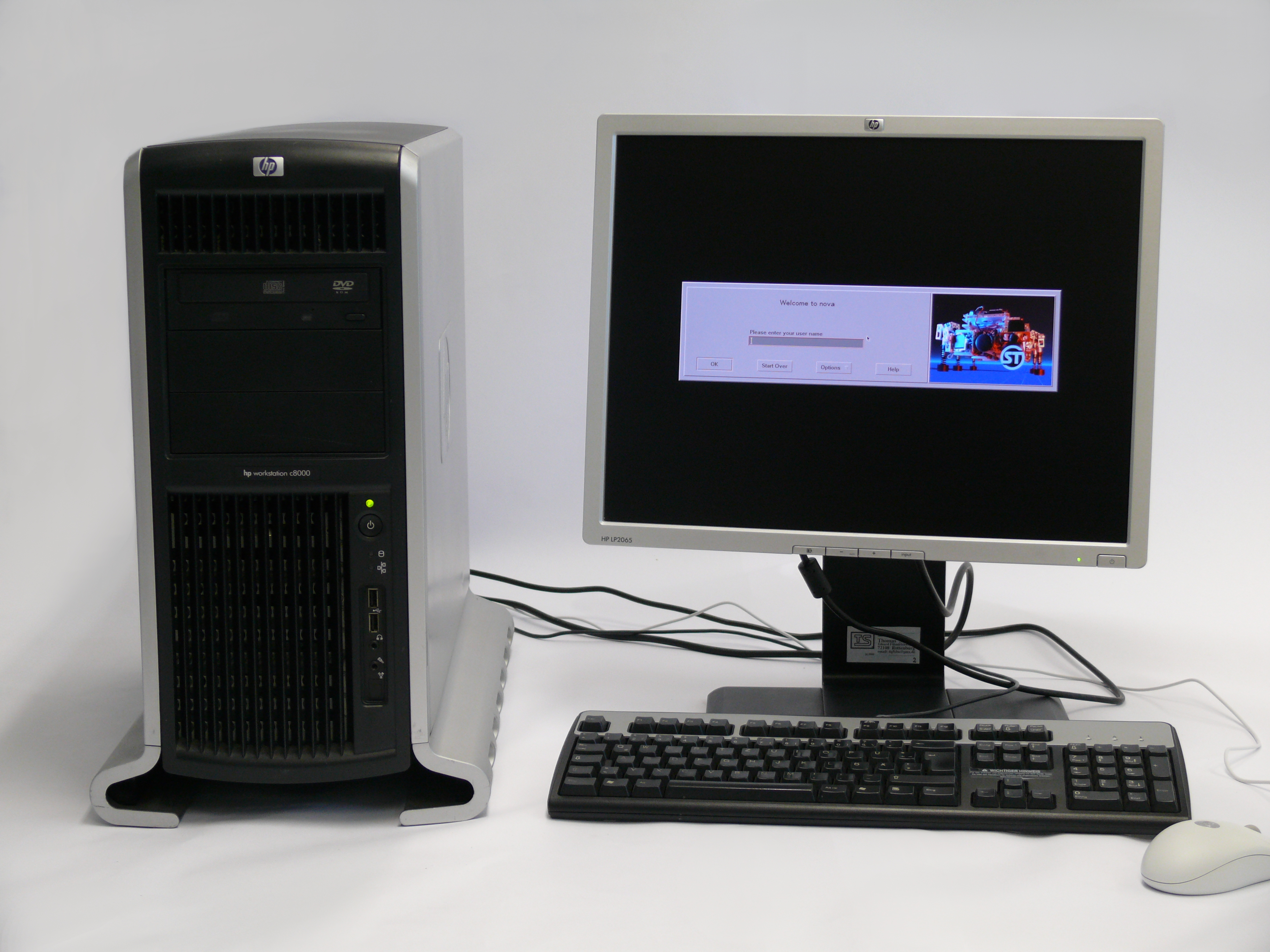 As manufacturing rolled into the late 1990s, automation continued to grow, and analyzing the data became a critical factor. Can makers could now consistently run a modern plant with faster changeovers, but the data was not always meaningful and accurate.

More data points were being collected, but not nearly enough to provide real-time reporting for all situations. Stroke counts and line infeed and discharge counts were the main data collected – in other words, the beginning and the end of the process. More granular data collection from the middle of the process was largely missed. Key data points including downtime events, alerts, and spoilage were not being monitored and addressed in real-time, leaving a considerable gap regarding efficiencies.

Legacy MES systems historically succeed at gathering information to keep production running and collect required data points. However, pulling information out for analysis or real-time assimilation with other important events was not always a readily available function.

During this time, manufacturers were looking for ways their systems could alert operators to potential problems before they affected production. They wanted actionable data to be collected, analyzed, and delivered in a meaningful way for the plant floor workers and the decisionmakers. Moreover, visualization of the data matters. Clearly understanding what the data means for the shop floor and enterprise is king.
With those goals in mind, many manufacturers began to move toward high-speed data collection, allowing for real-time data on the plant floor.

These competitive cutting-edge manufacturers began to reap the benefits of real-time data, enabling the use of visual alarms to alert operators of processes that were trending toward high spoilage or causing downtime. 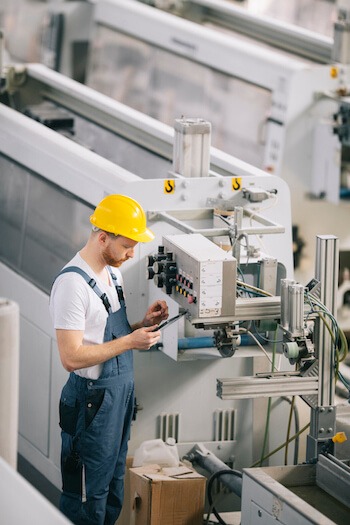 From 2010-2020, thanks to further automation, manufacturers became even more flexible and adaptable, with the ability to change over lines even more quickly. Lines and machines were smarter and faster due to much of the process being automated with sophisticated line control systems and programming.

Robust manufacturing business intelligence software became a game-changer for manufacturers, providing one version of the truth for a plant and an enterprise. Real-time and historical data became even easier to gather, process, and analyze. Knowledge transfer was no longer tribal, and, therefore, was more easily communicated throughout the enterprise. Organizations could now scale with ease.

The Future of Data Collection 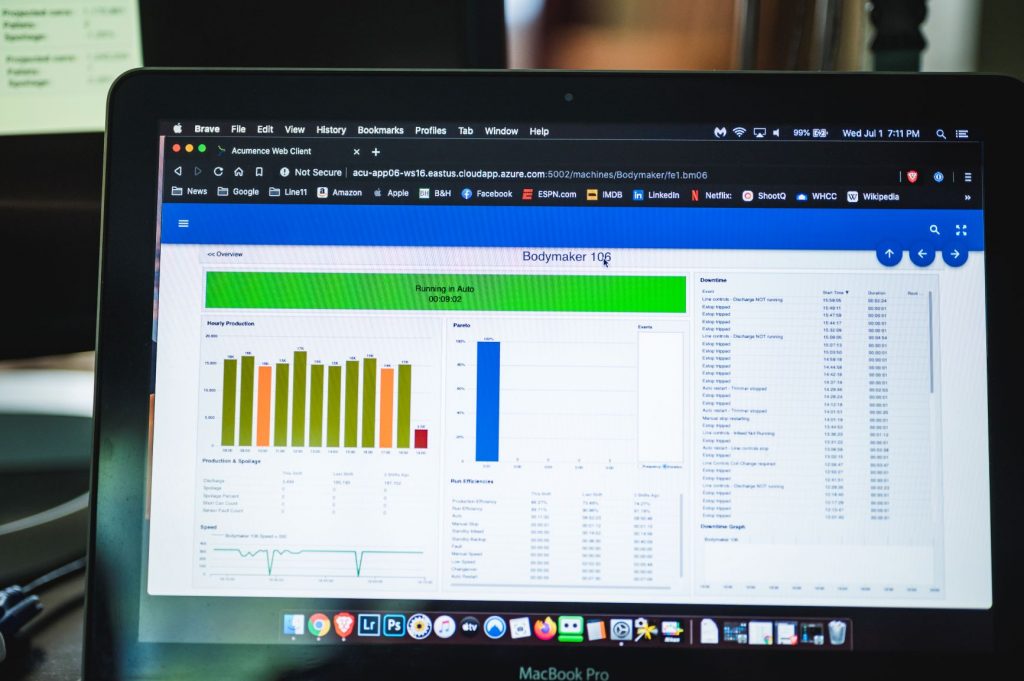 Hardware and software technology within manufacturing will continue to spark advancements for can makers in the coming years. Enterprises will be able to drill down even further into data for predictive capabilities and contextual awareness. This has already started with Industry 4.0: the ongoing automation of traditional manufacturing and industrial practices – using modern smart technology – which includes the internet of things, cloud computing, machine learning, and cyber-physical systems.

As current trends continue, almost everyone within an organization will be an information worker, with real-time data capabilities at their fingertips to assist in decision-making.

We all live our lives smarter and faster than ever before with the aid of home, health, banking, map, music, weather, and so many other smart apps and digital devices. No one wants static information anymore. We desire a real-time mobile experience in every facet of our lives, even within manufacturing. The future holds considerable advancements within mobile manufacturing business intelligence platforms and applications. This means relevant data at every step of the manufacturing process, real-time spoilage and downtime alerts, predictive maintenance alerts, and the ability for individuals to subscribe to only relevant alerts for their position.

The future is wide open. Know that the Acumence team will be right there at the forefront as it unfolds, helping can makers achieve operational excellence by detecting, analyzing, and eliminating production losses smarter and faster than ever before.

About Acumence:  Acumence is a manufacturing business intelligence solution, designed to meet the needs of the can making industry and developed by US-based Flexware Innovation, provides actionable information through real-time views and historical metrics for the entire can manufacturing process. Can manufacturers utilize Acumence to achieve high levels of operational excellence by detecting, analyzing, and eliminating production losses. 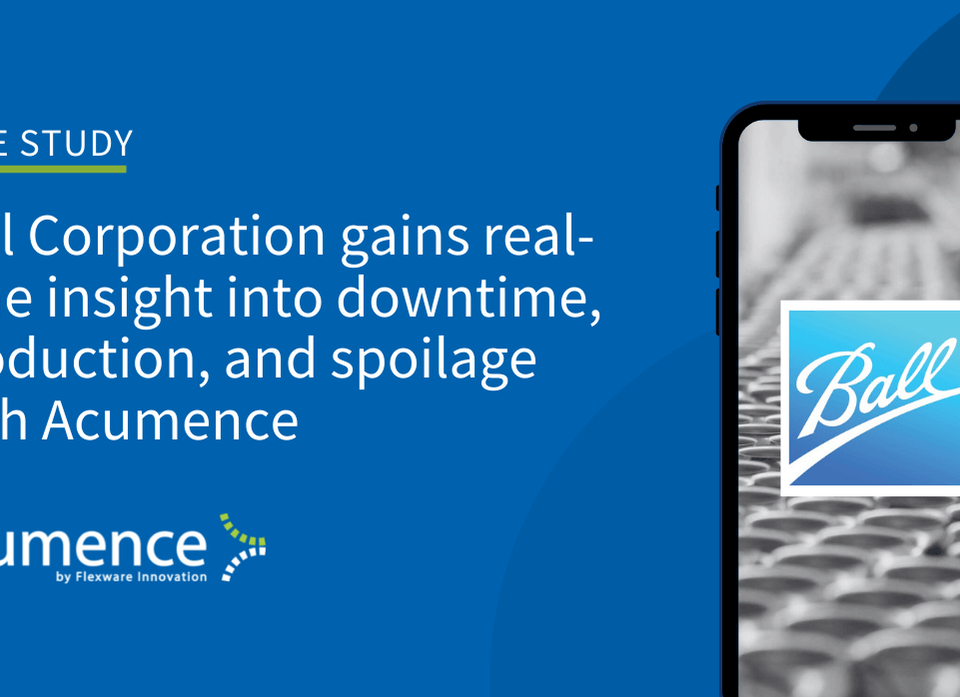 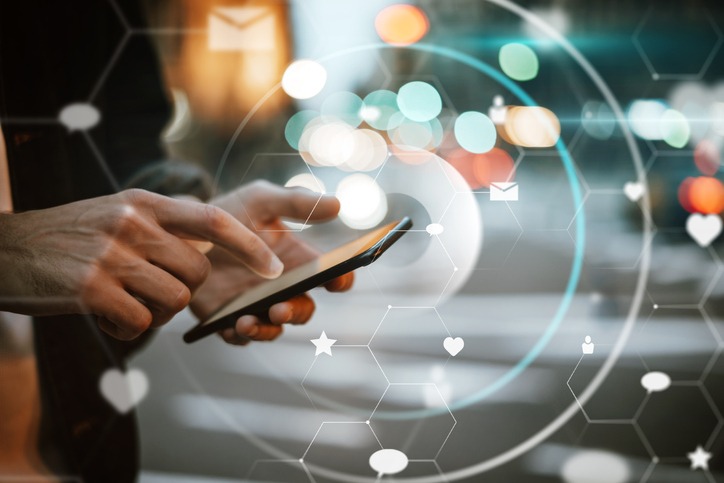 Creating a Strategy for Notifications to Drive Continuous Improvement 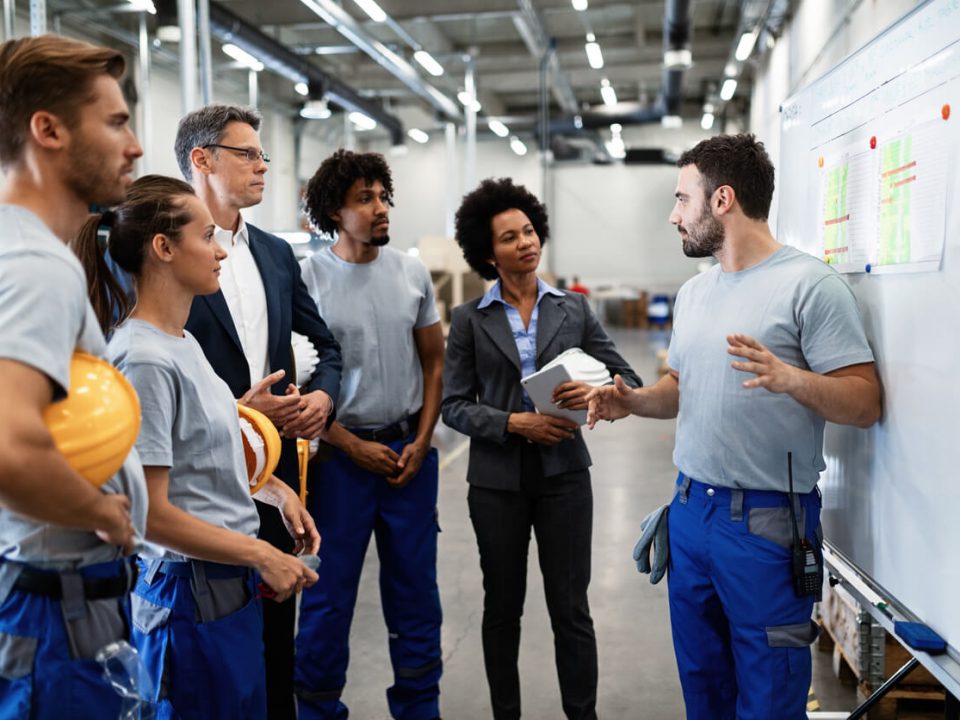 ESG: What Is It and Why Should Manufacturers Care?

Subscribe to our newsletter to stay in the loop!