The History of Canning and Can Making

The History of Canning and Can Making 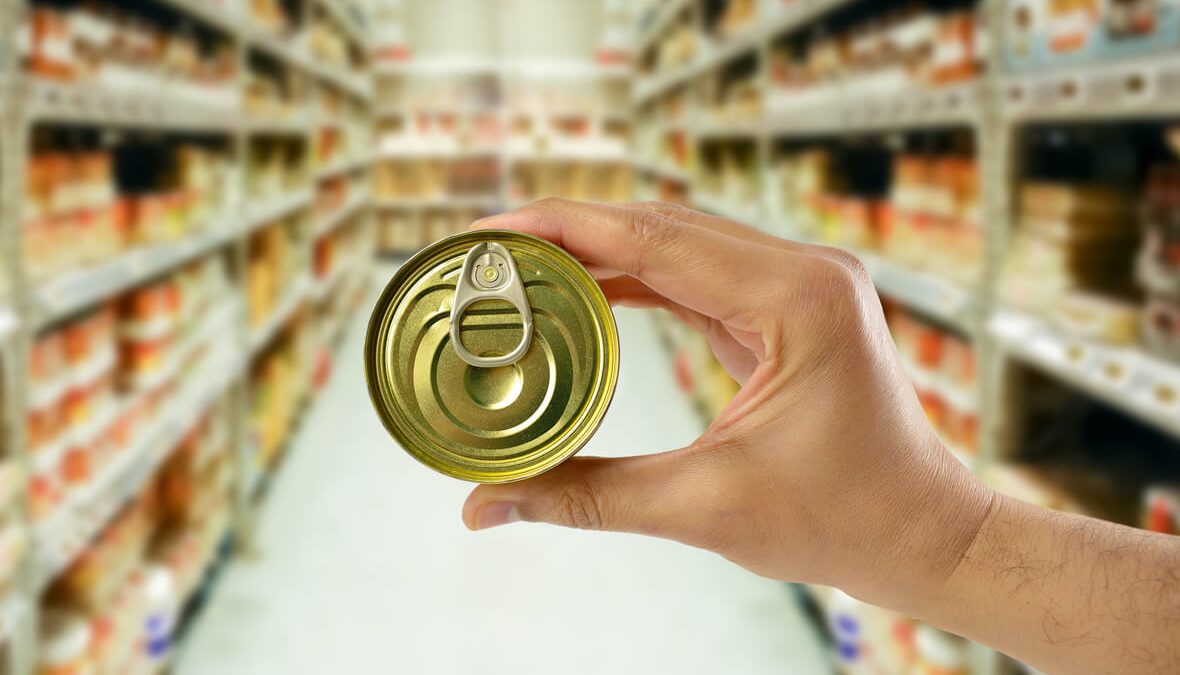 Green beans, Vienna sausages, tuna, peaches, soup, soda, and more!  What canned staples are in your pantry right now?  Have you ever pondered the history of canning and food preservation?  It is a fascinating tale that weaves across the globe and centers on preserving the bounty of the earth’s harvest to meet the world’s nutrition needs year-round.

The Development of Canning 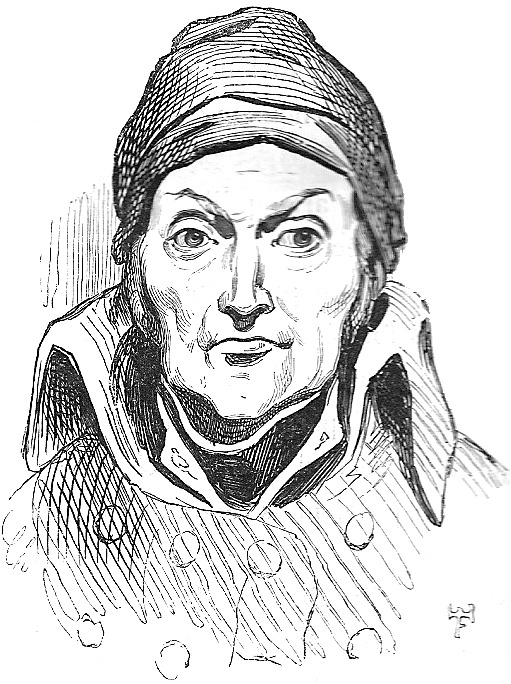 This story begins in France in the middle of the Napoleonic Wars (1803-1815) with a French inventor by the name of Nicolas Appert.

Limited food availability had caused military campaigns to be held mostly in the summer and autumn.  In 1795, the French government had offered a hefty cash award to any inventor who could devise a cheap and effective method of preserving large amounts of food for army and navy use.

During the late 1700s, Appert had begun to experiment with ways to preserve food, observing how cooked food sealed inside a jar did not spoil unless the seal leaked.  In 1809, he presented his method of preserving all kinds of food substances in corked and wax sealed glass jars that were then wrapped in canvas and boiled.  He was awarded the French government prize in 1810 and is now referred to as the “Father of Canning.”

He subsequently published a book called The Art of Preserving Animal and Vegetable Substances.

A milestone indeed, but interestingly, the exact reason for the lack of spoilage would remain unknown for another 50 years until Louis Pasteur, a French biologist, microbiologist, and chemist, would demonstrate the role of microbes in food spoilage. 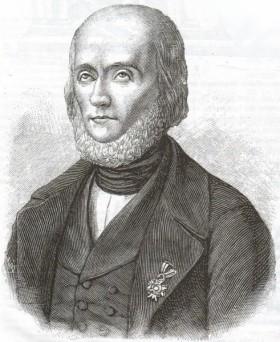 Building from Appert’s method of food preservation, Frenchman Philippe de Girard patented his preservation idea and sold his patent in 1811 to Bryan Donkin and John Hall, who developed the process of packaging food in sealed airtight cans. Initially, this canning process was slow, labor-intensive, and costly.  It led to canned food being too expensive for the poor and middle class.  Moreover, can openers did not exist yet, so cans were hard to open. 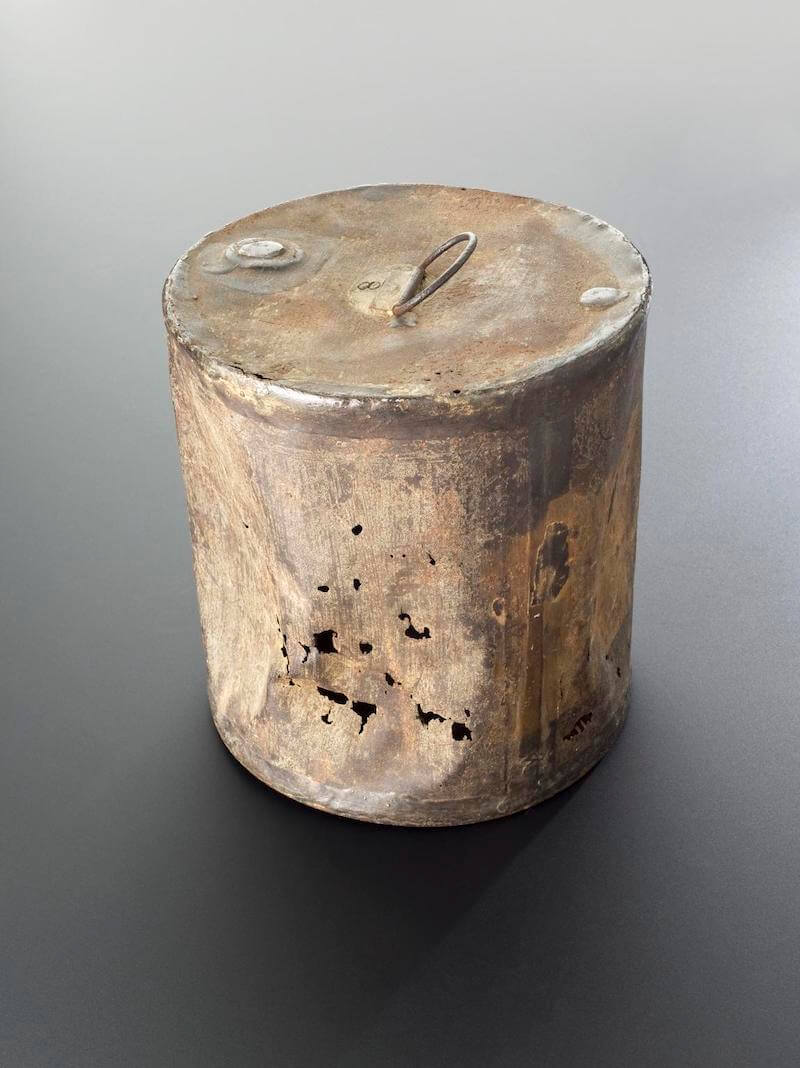 During these early years, the main market for canned food was the military, but a few cans made their way on Arctic voyages with the wealthy.  One of these cans was opened years later and found edible and nutritious, though it was not analyzed for contamination or spoilage at the time.

During the mid-19th century, canned food became a status symbol amongst the European middle-class.  Increased mechanization of the canning process, coupled with a huge increase in urban populations across Europe, resulted in a rising demand for canned food.  Several inventions and improvements followed, and by the 1860s smaller machine-made steel cans were possible, and the time to cook food in sealed cans had been reduced from around six hours to thirty minutes. 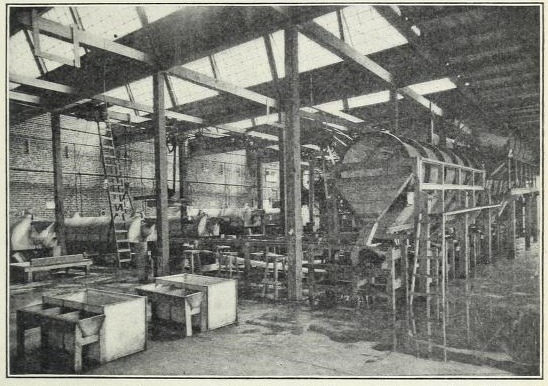 The Canning of Peas: Based on Factory Inspection and Experimental Data (1909) U.S. Department of Agriculture Bureau of Chemistry Bulletin Number 125, p. 17

Canned food began to spread far and wide.  By the late 1800’s several wars, including the Crimean, American Civil war, and Franco-Prussian war, put canned food into the hands of thousands of soldiers.  The demand for cheap, high-calorie food with a long shelf life continued to increase.  Can makers began to compete with one another using highly decorated printed labels and lowering prices.

However, the process was still crude and often done in small canneries with unsanitary work environments and lacked refrigeration.  It was very common for contaminated cans to slip onto the grocery store shelves.

Demand for canned food skyrocketed during World War I. Canned food such as corned beef, pork and beans, canned sausages, and stews were in high demand due to low cost and high-calorie meals. However, after widespread dissatisfaction over the quality of the food, better-canned items started to make their way to the soldiers, including soups, ravioli, and other hearty canned meals.

There are several ways to prevent spoilage during the filling and containment process including pasteurization, freezing,  drying, and using additive solutions.  However, most cans continue to be sterilized by heat, then hermetically sealed.

Regarding seaming and can making materials, things have changed considerably over the years. 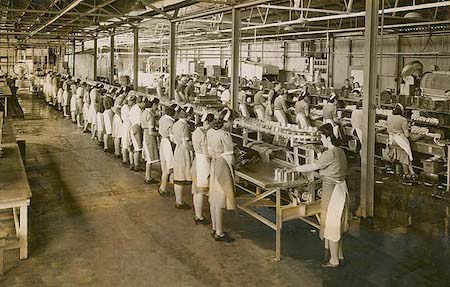 The seaming process is critical to ensuring a can is airtight.  The dangers of a can that is not sealed properly are great, including dangerous bacterial contamination.

Originally, can making was an extremely labor-intensive process.  There were workstations for blank cutting, body forming, side seam solder, bottom solder, and top solder.  A single small operation could produce around 600 cans per day.  As demand continued to skyrocket, can makers began to pool knowledge and combine facilities.  A game-changer known as Sanitary Cans arrived on the scene in 1901 and advanced the industry by leaps and bounds.

With inventions for crimping the seams of cans, eliminated the need for solder, the “sanitary can” was invented by Max Ams in 1888, but didn’t hit the market until 1904. The Sanitary Can was made of the traditional cylindrical body, but the two ends were attached using what is now called a double seam. A sealed can was now impervious to contamination by creating two tight continuous folds (or crimps) between the can’s cylindrical body and the lids.  This eliminated the need for solder and provided for cost reduction and improved manufacturing speed.

In 1897, machinery was developed to crimp the can ends to the sides with a double seam sealed with a rubber compound.  This new method used rollers to shape the can, allowing manufacturers to begin producing can bodies via sheets of coated tin plate.  Rectangles were cut and curled around a die and then welded together to create the cylinder with a side seam.  The top and bottom of the can were flared to create a quarter flange around the edge.  Ends were die-cut, shaped, and pressed to fit snuggly on the top and bottom of the can.  The body and the bottom end were brought together through a final seam by the can maker and the top end applied by the filler. In 1904, the double seam cans were in full production and dominated the market by 1911.

In 1957, aluminum was introduced as a more durable and recyclable solution for metal can making. It was officially introduced to the market in 1959 by beer-makers Adolf Coors Company. 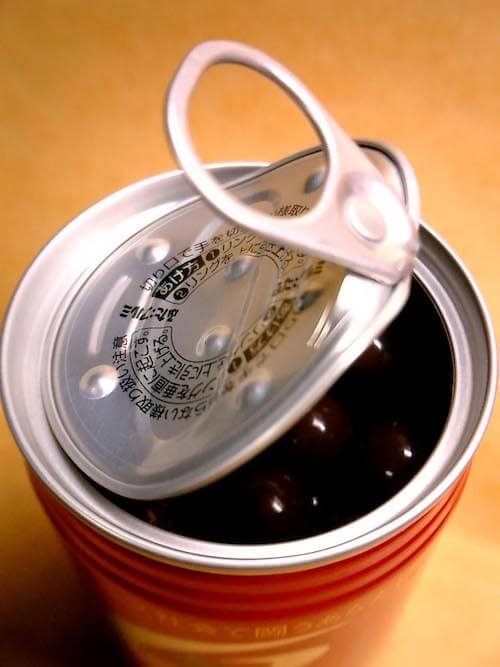 Another key development was the interior can liner, typically plastic or wax, that helped to keep the product’s flavor from containing a metallic taste and eliminating corrosion caused by acidic contents.

Another key development was the interior can liner, typically plastic or wax, that helped to keep the product’s flavor from containing a metallic taste and eliminating corrosion caused by acidic contents.

In 1974, more than 100 years after a steamboat named the Bertrand sank in the Missouri River, canned food was retrieved from the shipwreck and tested to determine if it was still safe to eat.  There was no trace of microbial growth found.  The smell and appearance had suffered, but even after 109 years, it was perfectly safe. 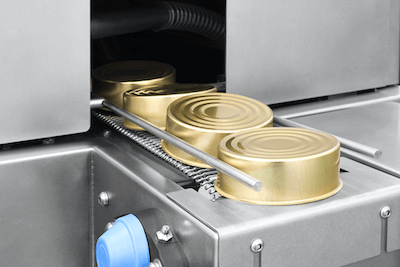 As the decades went by, automation, monitoring control systems, and improved processes have led to more efficient can making world-wide.  Statistical tracking of production flow, downtime, spoilage, and scrap has become key in remaining competitive and keeping up with the ebb and flow of demand.

Freshness, convenience, and efficiency remain front of mind for industry engineers, as they continue to work on advancements in protective linings, bonding materials, printing, and ease-of-use features.

With less guesswork, can makers are growing their businesses and fueling decisions with accurate real-time data.  Today’s modern can making operations depend on robust Production Information Systems for their day to day operations and data gathering. 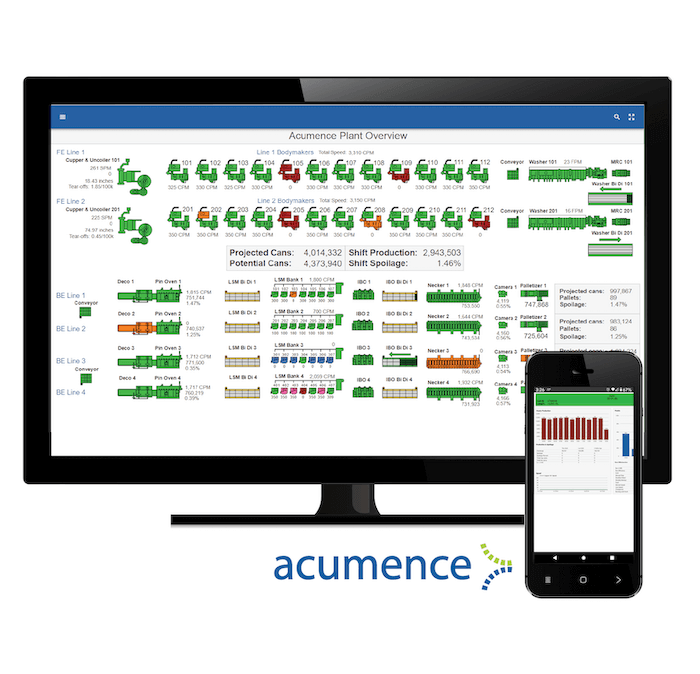 Large can makers are turning to enterprise-wide Production Information Systems for insight into their high-volume operations, as well as, overall productivity and efficiency.  Learn about one industry solution that is employed by the top five can makers across the globe – Acumence.

Worldwide, can making is an indispensable industry.  That has never been more evident than during our current pandemic.  History shows us that can makers will surely continue to evolve, and with technological advances and growing artificial intelligence (AI) adoption, they have never been more perfectly positioned to meet rising demands now and into the future. 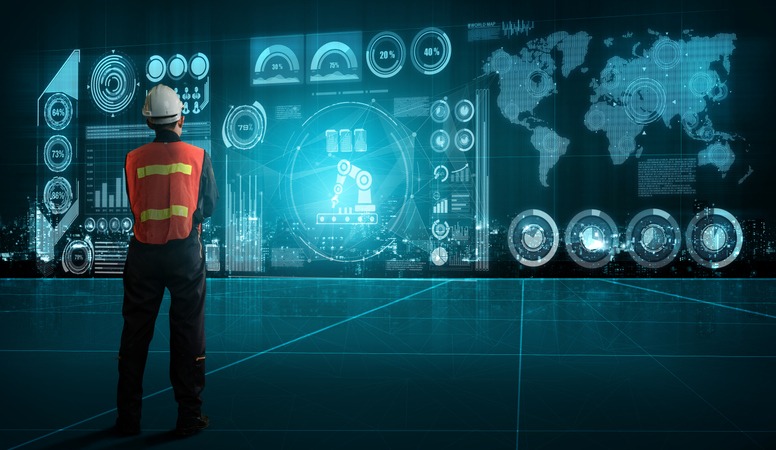 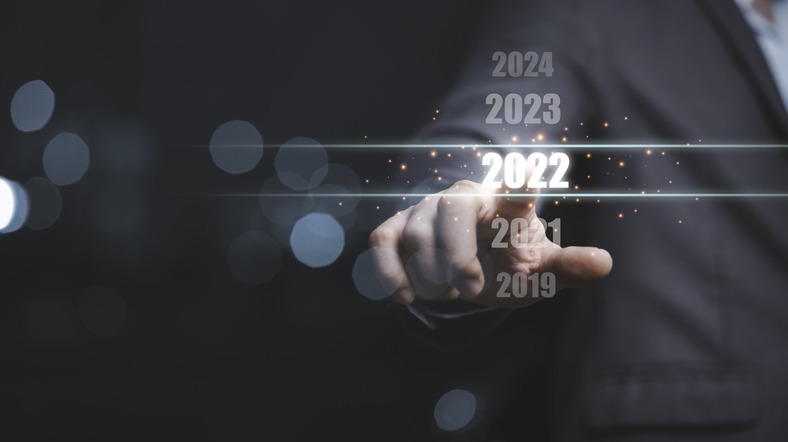 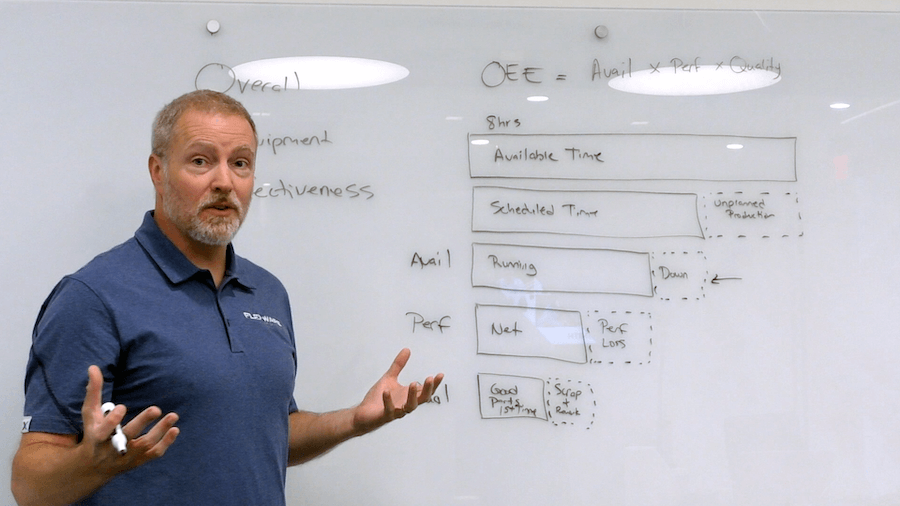